The Tragic Death of Voltaire the Atheist 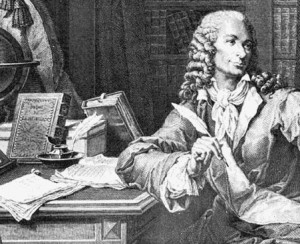 Death is such a beautiful thing, and death is such a horrible thing. It’s actually both, depending wholly on the passing pilgrim. Death is just as beautiful as a saintly life or just as dark as an unbelieving life. No one can doubt that death is inescapable. The words of God have spoken, “… it is appointed unto men once to die, but after this the judgment” (Hebrews 9:27). Death is such a landmark of life that it must be designed as one would write their will.

The noted French atheist, Voltaire, died a frightening death. Let me quote for you the exact record as published, “When Voltaire felt the stroke that he realized must terminate in death, he was overpowered with remorse. He at once sent for the priest, and wanted to be ‘reconciled with the church.’ His infidel flatterers hastened to his chamber to prevent his recantation; but it was only to witness his ignominy and their own. He cursed them to their faces; and, as his distress was increased by their presence, he repeatedly and loudly exclaimed, ‘Begone! It is you that have brought me to my present condition. Leave me, I say; begone! What a wretched glory is this which you have produced to me!’

“Hoping to allay his anguish by a written recantation, he had it prepared, signed it, and saw it witnessed. But it was all unavailing. For two months he was tortured with such an agony as led him at times to gnash his teeth in impotent rage against God and man. At other times in plaintive accents, he would plead, ‘O, Christ! O, Lord Jesus!’ Then, turning his face, he would cry out, ‘I must die-abandoned of God and of men!’

“As his end drew near, his condition became so frightful that his infidel associates were afraid to approach his beside. Still they guarded the door, that others might not know how awfully an infidel was compelled to die. Even his nurse repeatedly said, ‘For all the wealth of Europe I would never see another infidel die.’ It was a scene of horror that lies beyond all exaggeration. Such is the well-attested end of the one who had a natural sovereignty of intellect, excellent education, great wealth, and much earthly honor.” (Dying Testimonies of Saved and Unsaved by Rev. S B Shaw, pp. 49-50.)

Reading of such a dying experience is overwhelming, even to us who are secure in salvation. Human emotions are a powerful source and no one can live and die without them. Our present generation has mainly escaped the horror of unpreparing for death by the use of drugs to kill all pain. Sadly, the beauty of a Godly death is also lost in our drug culture. The new “right” of the health world is the right to be free of pain. In most cases, the pain or joy is simply transferred to the immediate moments after death. We are spared both the joy and the screams.

Our Bible teaches us the absolute beauty of a saint’s death, “Precious in the sight of the LORD is the death of his saints” (Psalm 116:15). Isaiah spoke by prophecy of the triumph that Jesus Christ would accomplish over death, “He will swallow up death in victory; and the Lord GOD will wipe away tears from off all faces; and the rebuke of his people shall he take away from off all the earth: for the LORD hath spoken it” (Isaiah 25:8). Apostle Paul echoed this great prophecy, “O death, where is thy sting? O grave, where is thy victory? The sting of death is sin; and the strength of sin is the law. But thanks be to God, which giveth us the victory through our Lord Jesus Christ” (I Corinthians 15:55-57).

Now, let’s visit a great saint of God in his death. This Godly man has often encouraged me by his bravery in martyrdom. A great persecution was raging in the city of Smyrna and the cry was heard, “Let Polycarp be sought for.” He was taken and the proconsul gave this aged man an opportunity to recant his faith and trust in Christ. “He nobly replied, ‘Eighty and six years I have served Christ, who has never done me any injury: how then can I blaspheme my King and Saviour?’

“When he was brought to the stake, the executioner offered, as usual, to nail him to it; but he said, ‘Let me alone as I am: He who has given me strength to come to the fire, will also give me patience to abide in it, without being fastened with nails.’

“Part of his last prayer, at his death, was as follows, ‘O God, the Father of Thy beloved son, Jesus Christ, by whom we have received the knowledge of Thyself; O God of angels and powers, of ever creature, and of all the just who live in Thy presence; I thank Thee that Thou hast graciously vouchsafed, this day and this hour, to allot me a portion amongst the number of martyrs. O Lord, receive me; and make me a companion of saints in the resurrection, through the merits of our great High Priest, the Lord Jesus Christ. I praise and adore Thee, through thy beloved Son, to whom, with Thee, and Thy Holy Spirit, be all honor and glory, both now and forever.’” (Ibid., p. 17.)

A young man that had put off the call of the Holy Ghost and blasphemed Him, lie dying. His doctor had pleaded that he repent. Burying his face in his pillow he stated, “Oh! I have missed it at last” and then he died. A young lady wonderfully saved in a great revival became ill and had bid all her loved ones a happy goodbye. As she was dying, she joyfully told her sisters, “Don’t weep for me. Jesus is with me, I will not have to go alone.” She looked up as seeing someone special coming for her and then said, “Come on, I am ready to go.” She was gone!

Death can be so beautiful. Stephen, the first of the seven elders chosen to care for the widows, was arrested. After his powerful sermon to the angry mob, he was stoned to death. As he died, the Bible records his parting testimony, “And said, Behold, I see the heavens opened, and the Son of man standing on the right hand of God. Then they cried out with a loud voice, and stopped their ears, and ran upon him with one accord, And cast him out of the city, and stoned him: and the witnesses laid down their clothes at a young man’s feet, whose name was Saul. And they stoned Stephen, calling upon God, and saying, Lord Jesus, receive my spirit. And he kneeled down, and cried with a loud voice, Lord, lay not this sin to their charge. And when he had said this, he fell asleep” (Acts 7:56-60).