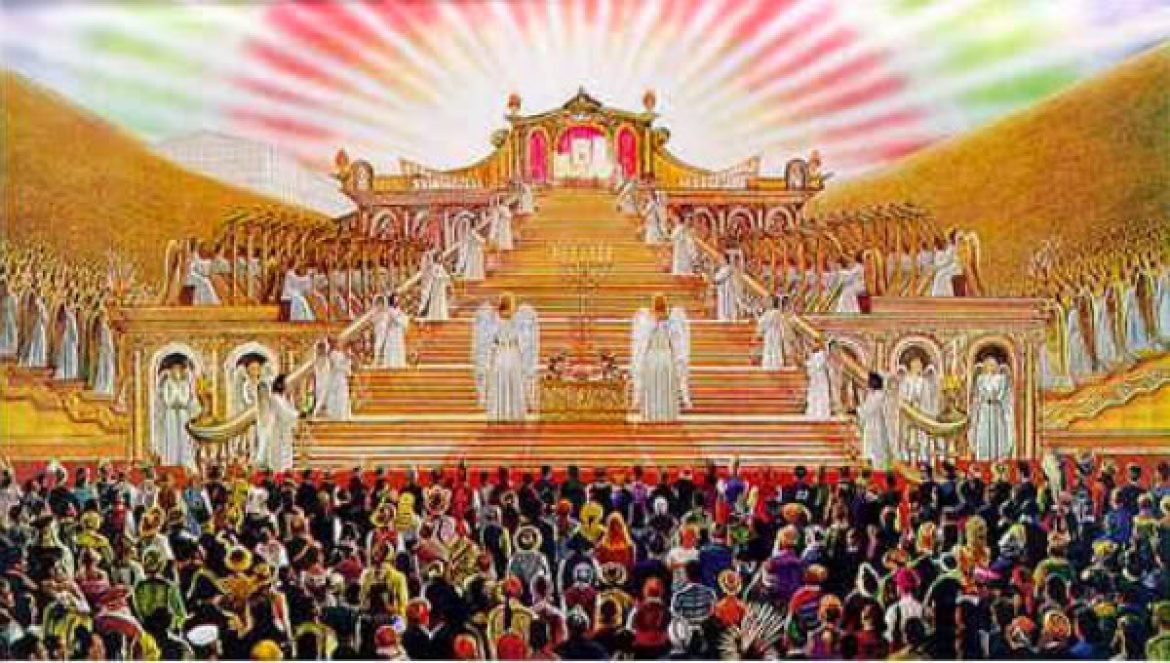 If Your Life Ended Today, Do You Have a Reward?

If Your Life Ended Today, Do You Have a Reward?

THE ETERNAL BRIDE OF JESUS CHRIST WILL RECEIVE THE HIGHEST REWARD AVAILABLE TO HIS SAINTS. There will be no cul-de-sacs or dead end streets in New Jerusalem. Every gold paved street will be a Hallelujah Boulevard. The mansions will be far superior than this world can imagine. Every bit of God’s New Heaven and New Earth will be grand and full of bliss, but nothing will compare to the magnificent city called “New Jerusalem.”

This city will be Home to the exclusive Bride of Jesus Christ. One of the Seven Angels out of the Heavenly Temple said the following: “And there came unto me one of the seven angels which had the seven vials full of the seven last plagues, and talked with me, saying, Come hither, I will shew thee the bride, the Lamb’s wife. And he carried me away in the spirit to a great and high mountain, and shewed me that great city, the holy Jerusalem, descending out of heaven from God, Having the glory of God: and her light was like unto a stone most precious, even like a jasper stone, clear as crystal…” (Revelation 21: 9-11) The description of the city is too exact to be understood in any fashion other than literal. Please let me paint a picture of this city that will descend out of heaven after the White Throne Judgment.

The city is a foursquare city. The width is exactly the same on all four sides and the height is equal. Twelve thousand furlongs is fifteen hundred miles. To imagine a city that is fifteen hundred miles square and fifteen hundred miles high that is surrounded by jasper walls is breathtaking. The highest mountain in the world is less than six miles high (Mount Everest – 29,035 feet) and the highest in America is less than four miles high (Mount McKinley – 20,320 feet). We are speaking of a city so massive that our minds can only imagine its grandeur. The city of New Jerusalem is 7,920,000 feet high compared to Mount Everest at 29,035 feet. This comparison makes Mount Everest appear to be nothing but a molehill. The total wealth of this entire earth does not hold a light to the wealth of this new city.

The gold that has been mined and minted during human history is minute compared to the gold in this city. It would not be enough to pave the streets of one level of this city and this will be a city of twelve foundations or levels. Each level will be one hundred and twenty-five miles high or 657,700 feet, over twenty-two times higher than Mount Everest. The height of the walls on each level is 144 cubits or approximately 226 feet. These walls are not provided to keep the glorified saints in or out. Nothing is more beautiful than the present massive stone walls of present day Jerusalem. These stone walls have a golden hue appearance as they are beautifully lit at night or in the sunshine.

But, the walls of New Jerusalem will be primarily wrought of jasper stone. Jasper is a dark green semi-translucent to opaque form of semi-precious chalcedony. Its beauty is rare. It is readily acceptable to a fine polish and has the physical properties of those of quartz. No one would think of building city walls out of jasper in our present world. The expense would be totally prohibitive to the richest person but certainly not to our Father. The entire walled structure of this city, all twelve levels, will be jasper and pure gold. It appears that the outside formation of these walls is jasper, with the interior of the walls being pure gold. The foundations at each level are one hundred and forty-four cubits, which is approximately 226 feet high. These foundations are then garnished with twelve manners of precious stones.

The first foundation is garnished with jasper on jasper. We can certainly expect that the garnishing jasper will be of a different shade as the jasper wall, which comprises the wall’s structure. There are different colors of jasper depending on the location where it is mined. The second level will be garnished with sapphire stones. The color of a pure sapphire is sky blue; using it to garnish the jasper will be extraordinary. The third level will be chalcedony, which can be any color of the rainbow from pale blue to yellow, brown, or gray. The fourth level will be garnished with emeralds. The finest emeralds are more valuable than diamonds; they are magnificent gems of the most beautiful green color.

The stone used to garnish the fifth foundation is sardonyx or onyx. This stone varies in color; it may be translucent or opaque and is often striped. The sixth stone used for garnishment is Sardis, possibly the red variety that is highly polishable and extremely beautiful. The seventh level is garnished with chrysolite, which is a form of topaz of Tarshish. The garnishment of the eighth level is beryl, which is actually colorless, but reflects a great variety of colors depending on foreign substances it contains. It is indeed a precious stone. The ninth garnishing stone on the ninth level of this city is topaz, which is called by some, the “gem of the setting sun.” Sometimes, it is said to be the color of gold or peach. The tenth level is chrysoprasus, which is called the apple and is a light green variety of agate. It is a very rare stone. The eleventh foundation of this magnificent city is jacinth. The jacinth is a red variety of zircon, which is found in square prisms of different shades.

The last of the twelve levels is garnished with amethyst. This is a royal purple and a fitting crown for the city. Imagine the crown of this city of transparent purple quartz that is decorating the jasper translucent walls with the gold within reflecting throughout the foursquare city. Beautify all of this with gates of pearl, each gate one pearl carved into form to be twelve matching gates into the city. Each gate will be fifteen hundred miles high. Glowing through each gate will be streets of pure gold. It is hard to imagine the beauty of a solid pearl gate set on the walls of this city. This city reflects the creative masterpiece of a Groom full of love for His eternal Bride. This city is almost too much to grasp but it will be easily understood when we awake in a glorified state. The Bible says that Heaven is God’s Throne and the earth is His footstool. With this sense of the greatness of “New Jerusalem” we can better understand this golden city.

This is the Bride’s home for eternity. The multitude of saved people that seek no perfection of living or total surrender to His perfect will, will certainly enjoy the city to visit and the glory of worshiping the Father and His Son. They will love the Golden City and bask in the Son light of Gods glory but live across the Father’s great new heaven and earth. “And the nations of them which are saved shall walk in the light of it: and the kings of the earth do bring their glory and honor into it. And the gates of it shall not be shut at all by day: for there shall be no night there. And they shall bring the glory and honor of the nations into it.” (Revelation 21:24-26) It’s up to every saved person to give their total life to serve Him only and to be part of the Bride. It’s the highest honor and reward in our Heavenly future.